Expenses include four dives, 2 in Seychelles and another 2 in Perhentian Islands.

The remaining 9 sectors were either free (redemption or zero-fare promotion) or nearly free, with most of their cost being airport taxes.

The end is nigh

It was an early (but not obscene) start in Kuching to catch the Malaysia Airlines direct flight from Kuching to Hong Kong (via Kota Kinabalu). FYI, direct means same plane (in airline lingo); it doesn't mean non-stop. It was 1h30 plus 2h55 with a fairly long turnaround at Kota Kinabalu of 1h05 (unlike AirAsia's 25 min turnarounds).

The new Boeing 737-800 was extremely annoying with a high-pitch whine audible in the cabin even when on the ground. I was ready to bail while taxiing for the first flight but I managed to bear both flights. Strangely, the crew turned the inflight entertainment for the domestic leg but not international one. There were two different sets of crew for each flight so maybe the ones on the second leg didn't know how to turn it on! It wouldn't surprise me.

Seated in row 14 (exit row) I had tonnes of legroom for my long (not!) legs. But even though this was the last exit row (with the exit in front and none behind), the seat didn't recline. That is highly unusual because non-recline seats are normally located in front of an exit only (to prevent hampering evacuation should the seat be reclined).

We arrived into Hong Kong on time at the newish satellite terminal where they put most narrow-body flights, which means that we were with lots of mainland Chinese flights. While we disembarked by airbridge, we had to be bused from this satellite terminal to the main terminal and that took about half hour including all the walking and waiting.

As my flight to Auckland is on standby, I couldn't be checked straight through. I had to enter and leave Hong Kong, changing from the arrival level to the departures. Hong Kong airport immigration queues always look worse they they actually are. But distances are large, so it isn't a great place to make tight connections. I made it to the Air New Zealand counter as it opened 3 hours before the flight which seems like perfect timing. But it did take 1h30 from disembarkation to check-in.

I had the choice of the Thai Airways, United and two credit card lounges and opted for Thai. Don't know why. Time went quickly with a shower and a feed. 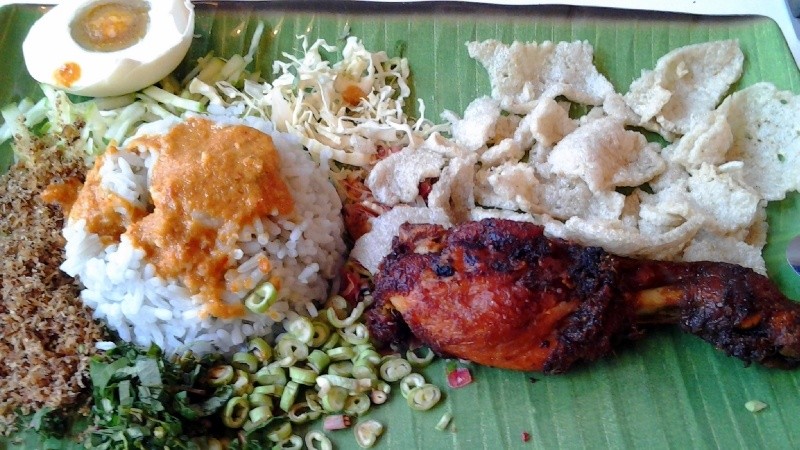 Breakfast of nasi kerabu (blue rice with herb and other condiments).
It was decidedly cool and unhumid in Kota Bharu [Kota-Bharu-travel-guide-1347729] this morning as we walked out of the hotel. I thought Malaysia was tropical but obviously I was wrong. I had the famous Nasi Kerabu (Kelantan specialty) for breakfast again before packing and heading out to the airport.

The flight to KL was delayed for about 15 minutes (instead of the usual AirAsia on-time or early) due to 5 passengers not showing up and having to offload their luggage.

Our 3h plus transit in KL went quickly in the Plaza Premium lounge again and soon I was bound for Kuching [Kuching-travel-guide-1096915] and Kim to Hong Kong (both within five minutes of each other).

I must have arrived back into Kuching on the same day as Pandelela Rinong (the local Olympian who won Bronze in the diving). There was a welcome sign for her at the airport.

I look forward to seeing my Malay friends from school some of whom I haven't seen for nearly 30 years! It will be Raya (Eid) in a few days and most of them will be back in Kuching for the celebration. 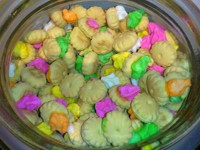 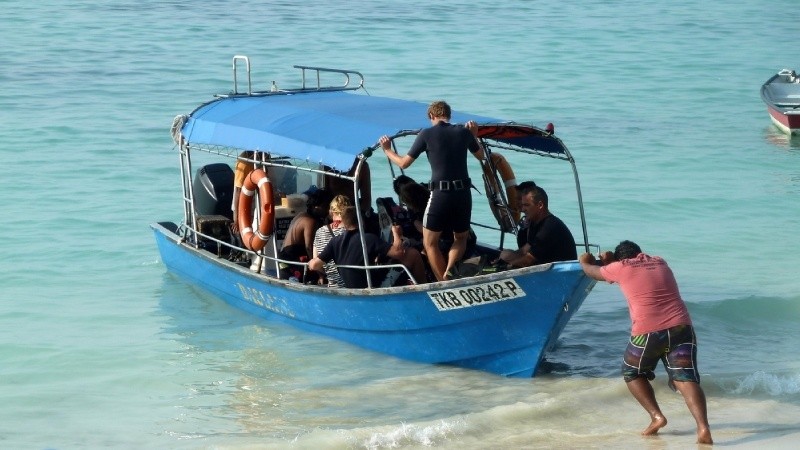 While we go back to the mainland, those at our dive resort today go to Temple of the Sea, one of the best sites around together with T3 (which we did go to fortunately).
I started the day by walking out of bed into the sea; it was lovely at high tide at Teluk Dalam where we were staying. We followed with breakfast and checked out at 1100.

Our boat back to Kuala Besut [Kuala-Besut-travel-guide-1359291] left soon after 1200. It was a smaller boat and the journey was about half hour only. We weren't asked to wear life jackets until close to port when the maritime police was sighted; we slowed right down and life jackets were handed out in a panic.

At Kuala Besut taxi drivers tried overcharging RM70 for the fare to Kota Bharu. The signboard showing RM50 which we saw last time had been cast aside for the arrival. We managed to get a ride at the correct price by digging our heels in. 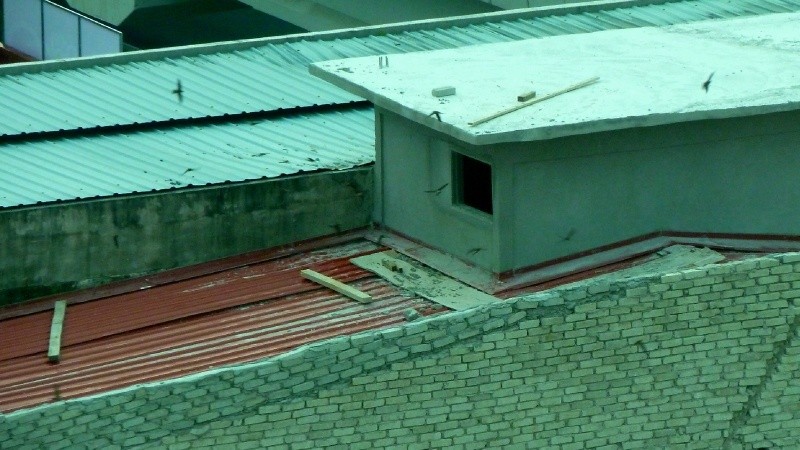 While I didn't get any photos of swift houses in Kuala Besut, here's a bad photo of one in Kota Bharu.

Walking to the taxi I noticed quite a few shophouses which had their windows blocked up with small apertures through which swifts were flying in and out of. I've heard about premises which people have used for swift nesting so they can collect their nests (a Chinese delicacy made from its saliva). It replaces the need for labourers to risk limb and life climbing up caves on shaky scaffolding. However, I wouldn't like to be neighbours with a bird's nest house. Imagine the chirping and the smell from the droppings! The taxi driver said these premises are licensed; the small and rural council don't think too much about the impact.

On the way, I saw a lorry transporting water melons. Nothing unusual about that except that on the water melons were lots of monkeys. They're going to be very far from home at the end of the day. 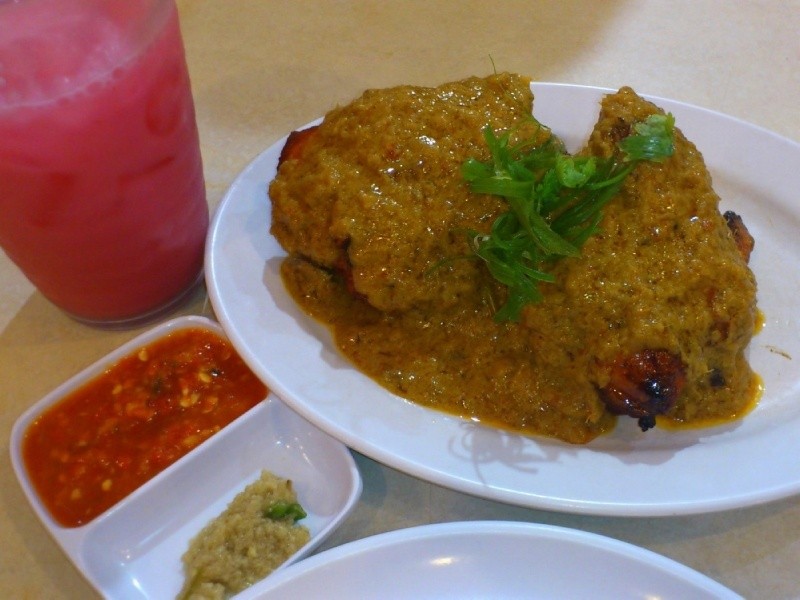 Ayam percik, the Kelantan specialty. Grilled chicken with coconut and lemongrass basting.Wonder what happens then? Perhaps take over somebody's garden and make it their new home?

We arrived at Tune Hotel Kota Bharu on the dot at 2pm, which is also its check-in time. After a short rest, we went to the KB Mall across the road to get lunch; most eateries open at 3pm due to Ramadhan. We couldn't help noticing the number of rather unsavoury-looking westerners hanging around the mall. They certainly don't look wholesome like all the others I've met in all my travels. I rather judgmentally concluded that they're the worst of the tourists to Thailand (sex tourists, drunkards and druggies) who have crossed the border for a visa run. They all queued outside McDonald's for its opening at 3pm; they obviously don't like the several Chinese cafes across the main road that are open during daylight despite Ramadhan. 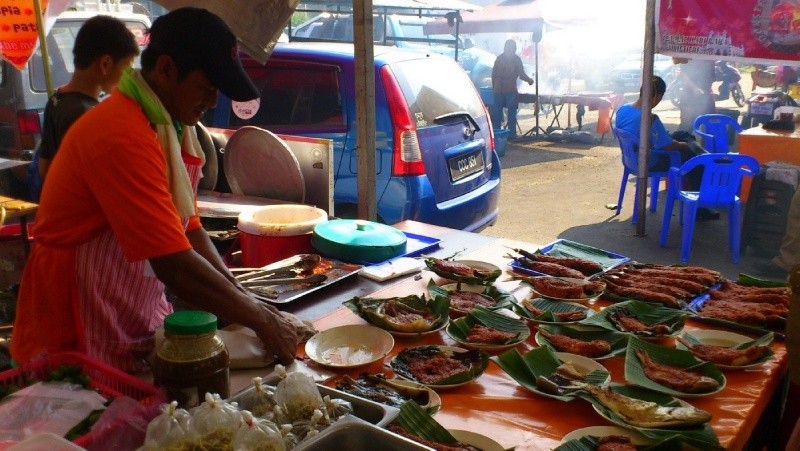 At the Ramadhan market; grilled fish.

We ate at a local franchise fast food outlet called The Chicken Rice Shop (with a standard somewhat between McDonald's and Denny's). They specialise in local favourites and their chicken curry and ayam percik was the best I've had in living memory.

From the mall, we went to the Ramadhan market near the stadium. The array of food on sale was pretty impressive and very tempting. Despite having just eaten we bought a variety of snacks plus "laksam" just out of greed and curiosity.

To round off the day, we went back to The Chicken Rice shop for some green mango salad, and deep-fried whole-prawn wontons as supper. I can't rate this place highly enough! It shows that fast food can be good food. 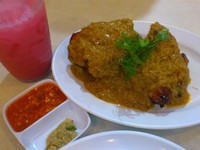 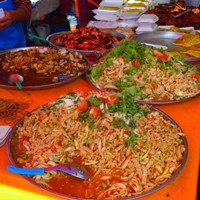 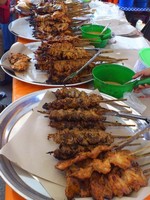 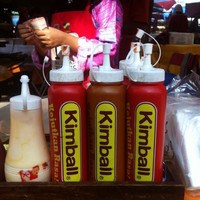 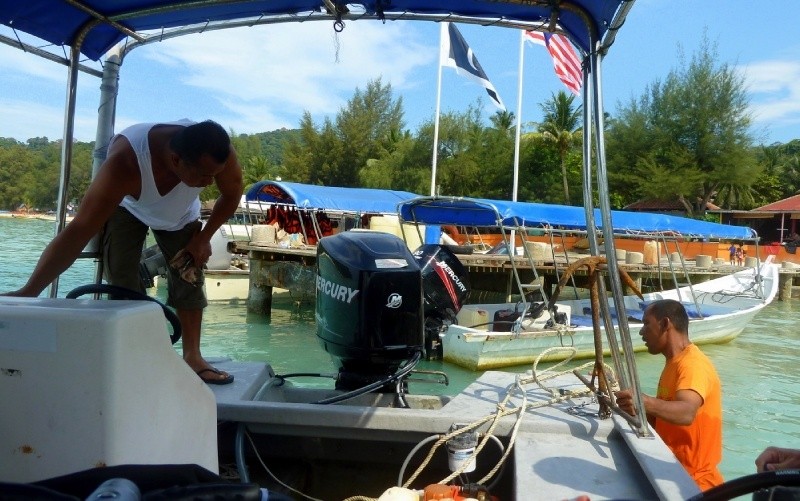 Engine rosak (broken)!
We were meant to do two dives with Alu Alu Dive Centre but after a delayed start due to weather, the boat broke down. We searched for another dive centre and ended up diving with Arwana Perhentian Dive Centre.

We enjoyed the experience far better due to a more vigilant dive master who also took the effort to point out interesting sea life to us. The dive sites were much better too:

1. Terumbu Tiga (aka T3) had interesting mini canyons and swim throughs.
2. D'Lagoon had the most beautiful coral garden I've ever dived in.

So, after yesterday, the Perhentians have redeemed itself a a diving destination. If it hadn't been for these two dives, I'd probably never come back here. Now, I know this place has great beaches, beautiful waters and also good diving! 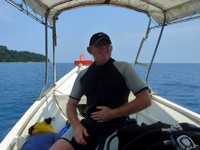