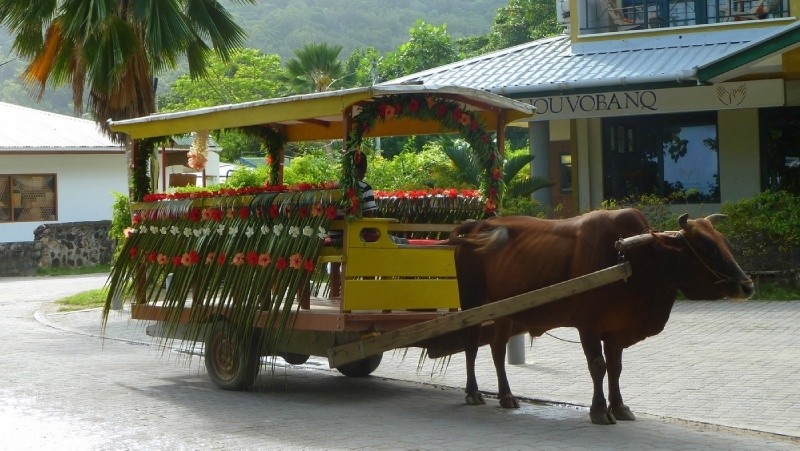 Traditional transport at La Digue.
Last night we had horrendous weather. The wind was so strong; I woke to dry ground so I guess it was the wind that was making all that noise and there was no rain.

It looked nice enough to go snorkelling so after breakfast I went down to the only shop that was open for business yesterday afternoon. The gentleman was there again and he sorted it out for me; it would be a 0930 departure (so there was about 20 minutes wait). He took off and let his workers take care of me.

I waited till 0930 but no one came to collect me; I gave it an extra 10 minutes and asked one of the boys. The rang the boss to no avail and tried calling someone else. I gave up by 1000 and went off. At least I tried to go on the supposedly best snorkel trip (Coco Island) around here. 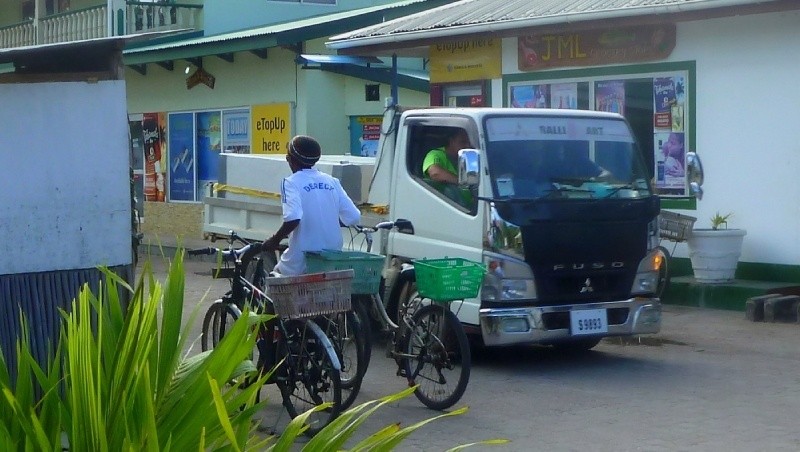 Bicycle delivery service is commonly seen in the early morning; this man is on a bike delivering two bikes.Sometimes it is for the best that it doesn't happen; maybe the weather and sea conditions weren't that great anyway.

I hopped on my rented bicycle shortly after; it had been organised through the guesthouse. Rule Number 1: Always check the height of the bike; it was a bit high for me even though (unlike many others) it wasn't labelled with the word "Giant". Starting on the west side where I was, I cycled north. The sea was calm but as I got on the east side, it was very rough. T

The best snorkelling spot on La Digue itself (excluding the offshore islands) is at Anse Patates which was too rough. I settled for Anse Severe which was calm and supposedly quite good too. The water here turned out be shallow, rocky and full of broken coral. I spoke to some people and they had to go quite a distance before they could see any fish; they said it wasn't worth the effort. So I swam and played in the water briefly before heading back for a chilled afternoon.

There were a couple of local beach parties going on. Being Sunday, it seems to be the thing to do after (or instead of) church. The drinking started quite early at mid-morning. I don't make judgements about when people start drinking; the important thing is when they stop drinking. Fast forwarding to the end of the day, there was no unruly behaviour around town at all; yep, they pass my test! 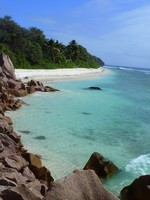